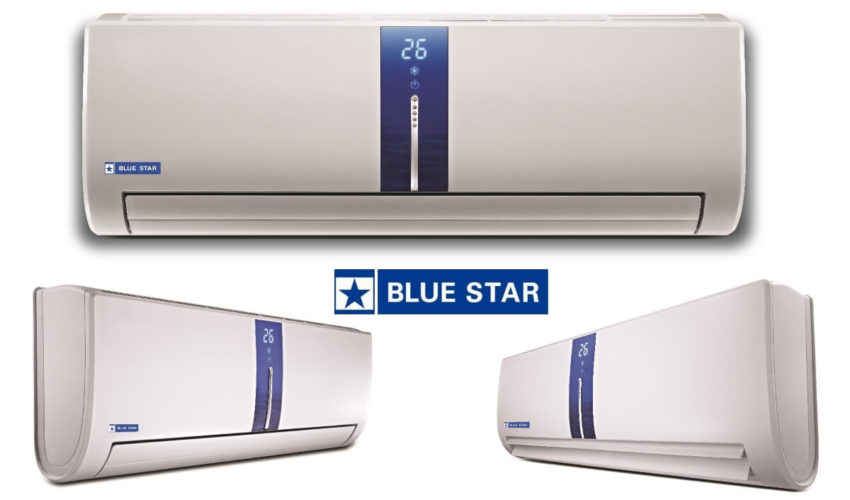 Blue Star the most prominent names in the air conditioning industry and the AC joint with the major market share is all set for the giant leap.  This air conditioning giant is geared-up with its announcement of the latest range of inverter and Split AC air conditioners.  This range is an all-new stylish as well as state of the art technology that promises power savings clubbed along with ultimate performance.

Blue Star is the largest selling air conditioning systems in Indian in all segments viz; domestic, commercial and centralized.  This brand new launch will mark the advent of a whole new era of air conditioning redefined with improved features.  Blue Star has always been the favorite air conditioner Blue Star AC Repair brand in India.  Now, the announcement of this new series with additional features for power saving is a step ahead.  The air conditioning giant with its presence in more than a hundred countries is all set to give more surprises.

Blue Star is The Pioneers in Industrial Refrigeration Units

Blue Star has worked really hard this time it shows from the range of products that have been announced.  Blue Star Air Conditioner with this new range has introduced several air conditioners of more than 40 models.  These models comprise of both split as well as Inverter air conditioners.

State Of The Art Technology Air Conditioners From Blue Star

A total of nineteen models of Inverter Air Conditioner model 5 star air conditioners have been announced.  This by itself is a benchmark in the air conditioner industry and challenging their limits.  With this launch the market share for inverter model split air conditioner Blue Star AC Repair with 5 star rating is the highest.  This definitely marks a whole new era of market domination by Blue Star for this summer season in Indian markets.  Blue Star will have the best cooling machines with a wide range to choose from, this summer that promises to deliver.   Most importantly, this air conditioning giant has used, Eco friendly refrigerant in all machines.  This sends out a strong message that they are environment conscious and not here to make profits alone.  So, this takes care of the ozone layer and harmful Ultra Violet rays of the sun hitting earth.  To top it all, this series of 5 star inverter cooling machines runs without the need of a voltage stabilizer.

Initially they were the cooling machine Latest Air Conditioner giants with the largest market share in the refrigerator ranges.  But, with the advent of huge demand of air conditioners in India they are now here with sheer innovation.  To this day, Blue Star holds the major share for commercial refrigeration used in many industries like ice cream and seafood.  Now, with the launch of domestic and residential air conditioners in amazing colors & styles they take a giant step forward.

Blue Star has the widest network of delivery system for their air conditioners across the length and breadth of this country.  They have a robust chain of stockiest, dealers and sub-dealers of more than 800 service centers to back sales.  This chain of air conditioning service centers, extended service support to residences, offices, hospitals, shopping malls etc.  Blue Star has always been the top and the best choice of consumers with its unbelievable technical support.  In the past two years, this trend of demand had seen new heights due to urbanization and economical up gradations.  People are now looking for luxury and these cooling machines Blue Star AC Repair is gradually becoming a common need in most households.  While the fact remains that Blue Star room air conditioners are not available directly to consumers for residential installations.  The demand seemed to be so huge that for residential air conditioning units that Blue Star recorded major sales from this segment.

Some of the features like ‘i-feel’, the directional air conditioning and 6 stage filtering ensuring pure air are not available in other brands.  Other unique features include; turbo run, auto operations, dry running, sleep, aesthetic remote control etc.   To top the list of ultimate features are corrosion resistance, self-test, intelligent cooling etc.  The inverter model of Split AC type air conditioners from Blue Star is a real revolutionary product.  These cooling machines are so well engineered that they save power like crazy.  Apart from low power consumption their design is just awesome and elegant on the wall.  Blue Star has an existing network of delivery system to reach its customers and consumers.  However the company plans to focus on this area by widening its network as well as its service & installation Blue Star AC Repair facilities.  Blue Star has plans to build a reliable outlet network of business franchise and retailers to reach residential consumers.

Blue Star is a cooling machine Latest Air Conditioner giant that understands the significance of branding and advertising and hence, spends about 50 millions on it.  Now, this financial year this company has allocated budget more than double of it to effectively reach consumers.  This advertising budget will be intelligently spread over Television commercials and print media.

On The Path Of Prosperity

Thiagarajan. B was the Air Conditioning & Refrigeration Division’s President of Blue Star who led the sales campaign.   He once said to the media that the residential segment of air conditioning business is on the steep demand path.  The residential air conditioners demand is going to be the sole contributors of this market growing three folds in one year.  He had asserted that Blue Star is the expert in commercial, centralized and large scale air conditioning.  By virtue of the company’s more than 6 decades of hardcore experience in cooling spaces we will win in the residential segment too.  The market for residential and domestic air conditioning is huge and bigger than estimations.  This calls for an immediate and emergency marketing and product design plan and things are in place.  This is the major focus why Blue Star AC Repair announced launch of more than 150 models of residential units.

This launch announcement is the biggest benchmark for Blue Star Air Conditioner in the residential cooling machines segment.  The company’s design engineers and thermodynamics engineers did their homework really well.  We can see the results and they are just unbelievable and state of the art technology used.  This is the first time in the history of air conditioner production when one brand has launched this many number of models.

Blue Star had always maintained its status and position of being the number one manufacturers in quality air conditioners.  They have the best ever service network and excellent customer service for after sales services.  Blue Star is almost nearing a century of pioneering in commercial refrigeration system for institutions, hospital, corporate etc.  Blue Star has end to end centralized and air conditioning and refrigeration for various applications.   Whenever any company that is listed on the stock markets comes out with some innovative solutions, its share prices shoot.  The same is true for Blue Star air conditioning and its share prices shot-up on intraday by as much as 2%.  This happened just after the announcement of the launch of new brands of air conditioners.  These models of air conditioners Blue Star AC Repair both split and 5 star energy efficient machines looked promising.  In order to make this launch announcement official, a company’s board meet was held on Jan 25th 2016.  This meeting concluded with the approval of the unaudited financial results for the previous financial year.  This consolidated standalone report is for the last quarter of 2016.

Blue Star Air Conditioner even though being the market leaders in commercial and industrial refrigeration systems had seen its highs and lows.  In the last year that is 2016 in a block of 52 weeks of the year it recorded highest stock value in October as Rs.583.90.

Blue Star dominates the air conditioning and commercial refrigeration systems in below segments;

Blue Star Latest Air Conditioner had released their standalone unaudited results of earnings in December 2016 for the 3rd quarter.  These results were published reflecting a nine month ending reports on income and net sales out of operations.  The numbers are impressive and a whooping Rs.9125 millions which was only Rs.7836 millions in 2015.  This depicts that the Blue Star Air Conditioner company is on the right track and is very prosperous.  While gross profit in 2016 is Rs.195.5 millions out of operations and before deduction of liabilities.  This profit is gross because it is before all costs such s finance, income and extraordinary expenses.  The same for the year 2016 was Rs.195.6 which is slightly on the higher side.  The current financial year’s net profit recorded as per balance sheet is Rs.141.8 millions.  This number equates Rs.1.51 for each diluted share of the company in stock markets.  The corresponding numbers for 2015 is Rs.92.7 millions and Rs.0.94 for every diluted stock.

Blue Star had always been on the path of prosperity as for numbers and seen steep profits and revenues.  It had recorded and operating profits of Rs.350.8 millions in 2016 which was only Rs.235.5 millions in 2015.

Blue Star Limited recorded a whooping operating profit in 2016 as Rs.350.80 millions which is robust growth.  The same corresponding numbers in 2015 was 235.5 million, which was a year back and this is after deductions.  After the announcement of a wide range of revolutionary Blue Star Air Conditioner, both split and inverter models, share prices saw a hike of 2%.  This happened in January 2016 after the historic launch decision which marked the advent of state of the art AC technology.  This announcement has rewritten history by launching stylish and energy efficient cooling machines.  The 1.5 tons residential Inverter Air Conditioner split air conditioner is an elegant milk white treasure.  It is fully loaded with amazing and unbelievable features that will leave all other brands way behind.  It is designed to condition interiors not only for the scorching hot summers, but also for chilly winters.  Latest Air Conditioner got many modes of operations such as dry, hot, humid, cooling and moist running for every season.

The product comes with free installation instructions and has a 24X7 product support call center.  Installation support is available by registering the new product on 18002091177 which is open round the clock 7 days a week.  All you need to do is to call and inform the date of purchase, model number, invoice number and service code.  The advanced features that these air conditioners Latest Air Conditioner come with are just unbelievable and awesome.  Unlike all other air conditioners which can sense temperatures only around the indoor blower unit, Blue Star machines sense the temperature in the whole room.  This helps in maintaining even temperatures all over the room.  This feature is sheer awesomeness and never before in any air conditioner in the country.  This is because of an Unbelievable technology, which incorporates temperature sensors in the Remote Controller.  This helps the Blue Star Air Conditioner to sense the temperature around the user or occupants in the room.  This is a rare technology that no other air conditioner has come out with and is a unique technology of Blue Star.

Why Does Your Air Conditioner Blower Hot Air?

How to Cut Down AC bills Effectively?